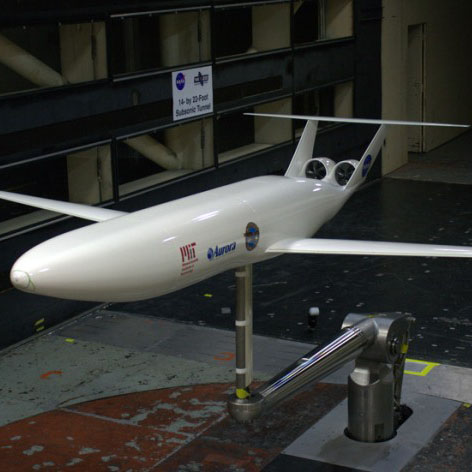 Aurora Flight Sciences Corporation is a leader in the development and manufacturing of advanced, unmanned systems and aerospace vehicles. In 2010 Aurora’s Research and Development division, based in Cambridge, Massachusetts was selected to collaborate with the Massachusetts Institute of Technology (MIT) and Pratt & Whitney to evaluate the potential of a Subsonic Fixed Wing transport aircraft for a NASA Aeronautics Research Mission Directorate concept study, called N+3.

The purpose of NASA’s revolutionary aircraft research effort is to meet the growing demand of air travel, address rising fuel costs, and make substantial developments in environmental and economic efficiencies. An important goal of the study is to define key technologies that will create a 70 percent reduction in fuel consumption relative to today’s 737-800 aircraft, offer the ability to operate from 3,000 foot runways, and result in a significant reduction in noise and pollution emissions.

A major part of the project is the assessment of aerodynamics, propulsion, operations and structure to ensure the full spectrum of concept improvements. Aurora and MIT have collaborated to produce a 1/11th-scale concept model, with a 14 foot wingspan and 3 different tail configurations, for these various assessments. With a limited amount of wind tunnel time at NASA, Aurora anticipated a need for a manufacturing solution that would greatly reduce its cycle times. “Every minute in the NASA wind tunnel is vital to the assessment and feasibility of the study. We knew we’d have to make tweaks and move fast to prepare the models,” said Roedolph Opperman, Spacecraft Systems Engineer at Aurora.

With recent advancements in 3D printing accuracy and material durability, Aurora decided to apply Fused Deposition Modeling (FDM) to the model designs. Producing the models’ thermoplastic components with FDM allowed the team design flexibility while meeting high aerospace standards and process requirements. Aurora partnered with the Stratasys DDM (Direct Digital Manufacturing) Group to prepare the designs for additive manufacturability and optimize the parts for tunnel testing. “FDM is the only technology capable of building these parts that we optimized with Insight proprietary software,” said Ryan Sybrant, Business Development Manager at Stratasys.

The N+3 designs had to go through an additional series of preliminary assessments because it was one of the first models completely manufactured with FDM used in NASA Langley Research Center’s 14×22 foot wind tunnel. Aurora had to ensure that FDM parts were structurally sound by performing in-house coupon testing of various FDM samples. After this preliminary analysis was completed and FDM was approved, Stratasys recommended Aurora work with its additive manufacturing services division, Stratasys 3D Direct Manufacturing, to produce FDM parts for the three models.

Stratasys Direct Manufacturing produced three main thermoplastic components of each model using FDM technology: A set of engine nacelle fairings that surrounded the fan and motor assembly, conical plugs of various sizes that affect the engine outlet flow diameter and an aerodynamic bifurcation for routing the engine power cables to the fuselage. The two ABS-M30i engine nacelles house the aluminum engine models, and the 8 interchangeable plugs, each with a slightly different design depending on the configuration. Of the 70 percent goal for reduction in fuel burn, 49 percent would come from the arrangement of the body and engines, according to the MIT-lead N+3 advanced concept study. Testing multiple engine plug configurations helps the team determine the best position for efficient airflow on the actual passenger jet. Aurora also experimented with part finishing techniques, including Stratasys Direct Manufacturing’s fast vapor smoothing process, Ready Part™ to minimize visible layer lines and find the optimum surface flow.

With the largest FDM capacity in the world, Stratasys Direct Manufacturing was able to deliver high-quality parts ahead of schedule. “Aurora went through multiple design iterations over a span of roughly 2 years. Some of the later iterations were actually drop-shipped directly to the testing center as delivery became a critical component of the success of the program. They wouldn’t have been able to maximize that tunnel time with traditional machining lead times,” said Jason Bassi, Account Manager at Stratasys Direct Manufacturing.

After the initial NASA wind tunnel assessment is complete, Aurora and the other partners will embark on the final round of tests with an optimized tail configuration derived using data obtained from the initial wind tunnel entry. You can expect to see this revolutionary aircraft on the runway around the year 2035.