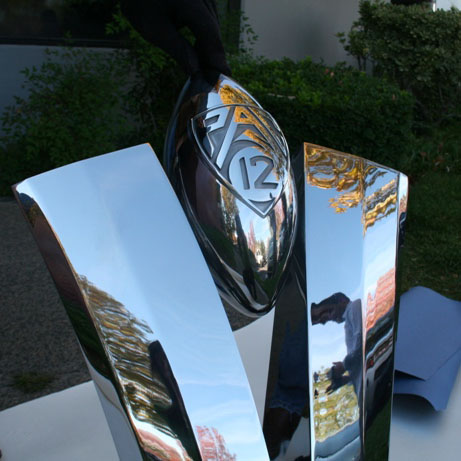 After the initial sketches were completed, Archie refined his idea using Alias Design software from Autodesk, and passed those drawings to Stratasys Objective3D Direct Manufacturing to help with production. “Transferring files from one system to another can create small amounts of fragmenting that needs to be cleaned up before the pattern can be made,” according to Jesse Marin, Solid Concept’s project manager for the trophy build. “We take care of any minor adjustments in-house.”

The process had to happen within a very short window of only three weeks from start to finish. “Although it may sound simple–just pour metal into a mold and you have a trophy–there are a lot of things to consider and steps to perform,” Jesse explains.

The trophies were cast out of 17-4 PH steel, then welded together and polished to look like Archie’s original design. The master pattern for both trophy sizes was built using Stratasys 3D Direct Manufacturing’s combination of its proprietary Quick-Cast build style, SC 1000 photopolymer material, and their clear coating process, which provided a superior investment casting pattern for the foundry. The process allows customers to produce functional metal prototypes without producing hard tooling, which often takes several weeks. Plus, the QuickCast process was completed at nearly a third of the cost.

The PAC 12 Championship Trophy was presented to the winning team on Friday, December 2nd just after the championship game. At that time, the team’s name was engraved into the granite base. The entire process of creating the 2011 PAC 12 Championship Trophy in such a short time period was a mixture of the creative intuition and passion of Archie Held, and the fast turn-around QuickCast process supplied by Stratasys Direct Manufacturing.